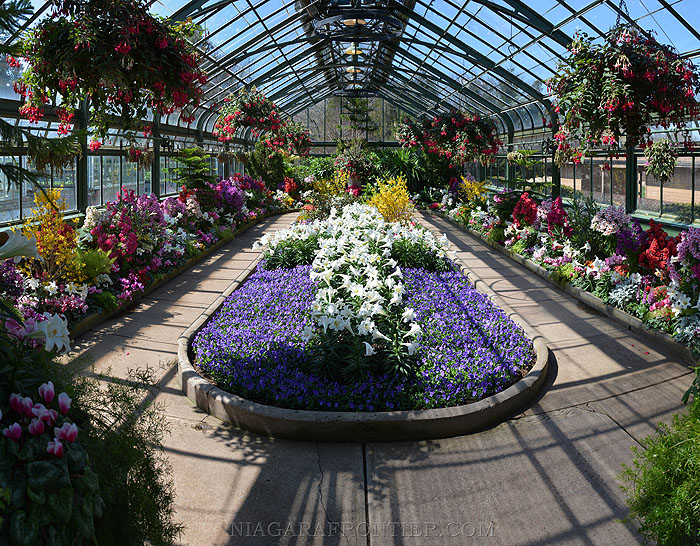 The Niagara Parks Commission Floral Showhouse is located at 7541 Niagara River Parkway. It is approximately ¼ mile south of the Table Rock Pavilion and the Horseshoe Falls, directly opposite from the former Toronto Power Station. It is open daily from 9:30 a.m. to 5 p.m.

The mainspring of any park development lies in its system of greenhouses. These structures with roofs and sides of glass to permit the passage of sunlight and heated to a temperature most conducive to the growth of flowers are used as propagating houses, forcing houses and conservatories. They are the center from which all gardener activities radiate in addition to supply plant material, may provide a source of pleasure and education to the general public. In proportion the growth of the parks system has been the need for adequate greenhouse equipment to meet the ever-increasing demand for bedding and decorative plants, and the propagation of nursery stock.

In 1894, two small wooden framed greenhouses were erected in Queen Victoria Park, directly opposite the Electrical Development Company (former Toronto Power Station). Both buildings were used by the Niagara Parks Commission as a source for annual flowers and for the production of tropical exhibition plant material. These were no more than forcing and propagating houses.

In 1896, the park superintendent strongly recommend the construction of a suitable greenhouse for the display of delicate and winter blooming plants and to which the public should have free access.

During 1897 and 1898, a small heated conservatory 60 feet long by 20 feet wide, was undertaken along with an additional propagating house and a fernery. While these facilities proved adequate for approximately a decade, by 1909 the need for further accommodation had become apparent.

By 1909, plans for a new system of greenhouses were prepared but the commissioners halted the project before construction began. The only site suitable site for the proposed development lay in the southerly portion of Queen Victoria Park, which for some years past had been constantly under construction by the nearby power companies. The Ontario Power Company had only completed constructed of one of three conduits provided for in their franchise. The remaining two pipelines had yet to be constructed. Because of the uncertainty involved, the commissioners finally decided that the time was not opportune for the erection of a new and modern greenhouse plant.

In 1909, as a temporary measure, two wooden structures measuring 28 feet by 40 feet were added to the existing building. The commissioners thought it was somewhat ironical whereby the very power developments, without which the park would not have been able to afford the new greenhouses, should have become the means of preventing them from attaining that goal.

Year after year, the old buildings were repaired and in 1921 another temporary addition became unavoidable.

In 1930, the last conduit of the Ontario Power Company was finally completed amidst the severe economic depression, which for some years had discouraged the commissioners from undertaking of expensive projects. Plans for new greenhouses were revived shortly before the Second World War only to be shelved on the outbreak of that conflict.

In the early 1940's the oldest section of the greenhouse collapsed injuring one of the gardeners.

In 1945, the construction of the modern greenhouses was commenced on the site midway between the old greenhouses and the Canadian Niagara Power Company Generating Station. The new facilities which included 11,000 square feet of glass expanse in the work room area with 3,000 square feet of bulb storage. Construction of the new greenhouse complex was not without its problems as excavations for the basement and boiler were hampered by shallow bedrock and large river boulders, some weighing up to five and 6 tons. Dynamite was used to blast away these obstructions. The new greenhouses were ready for opening on November 6 1946.

As the parks increased in size, more and more flowering plants were required to beautify the area. This necessitated the construction of several small growing houses that were attached to the existing complex. These facilities sufficed until 1909 when it was necessary to add to the existing buildings. In the early 1940s, a section of one of the oldest greenhouses collapsed seriously injuring a gardener. Due to World War II, construction materials were at a premium consequently rebuilding was delayed.

Finally in 1945 the commission constructed a new modern 11,000 square-foot conservatory, complete with growing houses, work rooms and public washrooms. The entire complex was centrally heated with hot water and boasted one of the first game soil pasteurizers. The latter was instrumental in reducing soil borne plant diseases and insects as well as eliminating unwanted weed seeds.

In 1947, the grounds around the new greenhouses were suitably landscaped when the Government of Holland presented several carloads of shrubs to the commission as an expression of gratitude to the Canadian people, a large group of Azaleas and Rhododendrons in the shipment was planted in front of the greenhouses. This location was not favourable to these plants which required acidic soil, shelter from the wind and partial sunshine. The Rhododendrons and Azaleas were therefore move more suitable locations within the park system in 1955 and replaced at the greenhouses by 2000 rose bushes which were the generous gift of Holland.

In 1951, two mortar units each 25 feet by 50 feet in size were added. The planned quadruple layout of the greenhouses was complete. An attractive rockery and Lily Pond was built in 1955 to form the initial feature of the conservatories, which included display, tropical and propagating houses as well as a cool house, potting room, storage sheds and machine shop. 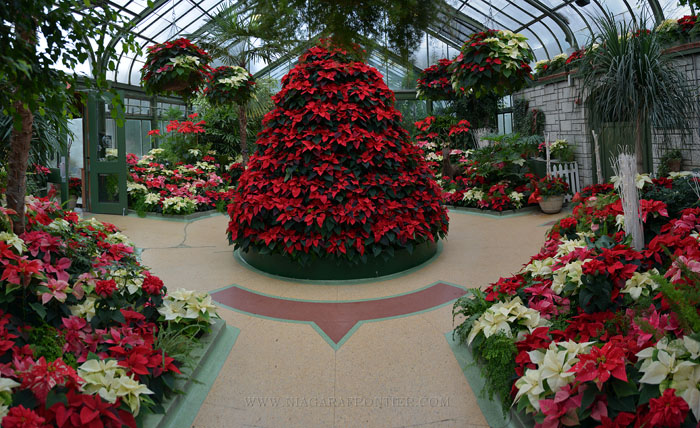 In June 1980, a spacious visitors reception center and garden shop, complete with modern washrooms was attached to the front of the existing show houses. The structure of glass, wood and stone covered 5,625 square feet, with the central glass dome rising to 40 feet permitting the growing of full size palm and other tropical plants. The visitor center has a seasonal orchid display amongst a backdrop of water and tropical plants. Tropical plantings are used in combination with all of the floral displays. In addition to the seasonal shows much effort is put into the design and maintenance of the tropical plant collections. The orchid collection is comprised of over 400 plants which provide a year-round floral exhibition. Tropical birds are free flying throughout all the display houses. 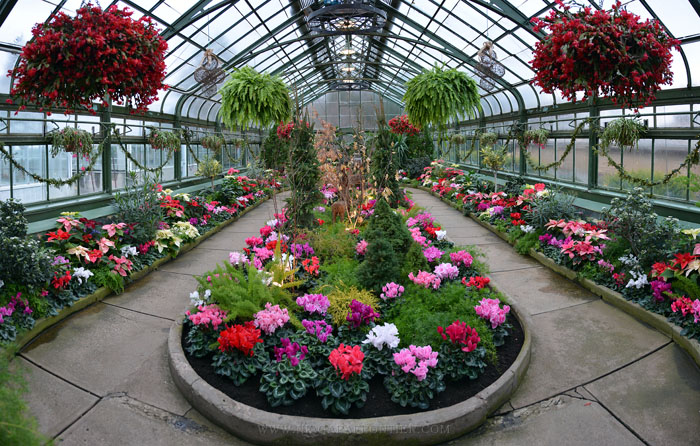 The fountain outside the Floral Showhouse

In 2002, the Niagara Parks Commission built a two acre experimental outdoor Mosaiculture Garden at the greenhouse facilities and gardens. It cost an estimated $1 million dollars. The Mosaiculture gardens was discontinued at the beginning of 2003. It was not a financial success.

The remaining gardens continue to exist today as part of the floral greenhouse/showhouse, displaying many annual and perennial flowers throughout the outdoor growing season.

Magnolia Blossoms lining a sidewalk at the Floral Showhouse

NIAGARA FALLS, ON – The Cullen Miniature Village, which has delighted hundreds of thousands of visitors at its former location in the Durham Region, has found a new home in The Niagara Parks Commission’s (NPC) Botanical Gardens.

“Our Botanical Gardens will be the perfect site for the Miniature Village,” stated NPC Chair Janice Thomson. “The village was originally developed for a botanical setting and they were intended to be viewed by audiences of all ages; our Botanical Gardens, with the Butterfly Conservatory right next door, will be the perfect home for this collection”.

The village is made up of 182 separate items, including the main village, cottage country, a train system, fairground, Santa Claus parade, and miniature accessories. The City of Oshawa purchased the village for $239,000 following the closure of Cullen Gardens. It has remained in storage ever since. NPC will pay the City of Oshawa $20,000 a year, over a five year period for the collection, starting in 2013.

“This is a wonderful addition to the Parks and will provide visitors with yet another compelling reason to visit Niagara Parks and Niagara. This was a much-loved attraction when it was part of the former Cullen Gardens and we believe that it will become an even greater attraction here,” Thomson said.

Once the village is refurbished and reassembled by NPC it will be put on public display in 2013. NPC has also pledged to erect a plaque identifying the important role the City of Oshawa played in keeping this unique collection intact for the public.

According to Oshawa Mayor John Henry, the planned move of the Cullen Miniatures to its new home at The Niagara Parks Commission’s (NPC) Botanical Gardens, celebrates a great man and visionary, Mr. Len Cullen. By keeping the collection intact, the City of Oshawa and NPC collectively bring new life to this treasured miniature heritage collection. “I look forward to visiting The Niagara Parks Commission’s Botanical Gardens to celebrate together the collection’s rebirth in one of Canada’s natural wonder locations. This is a fitting tribute to the creator of the collection,” said Mayor John Henry.

THANK YOU FOR VISITING